North Atlantic Coast tells the tale of settlements far north on the Norwegian coast, living from the abundant resources in the sea, coping with harsh weather, long distances to the markets and changing policies.  Dried cod was established as an international commodity in the Viking age, a thousand years ago. Cod winter fisheries was the fundament of a still thriving, specialized culture and architecture, especially well developed and diverse in the area from Lofoten, over Vesterålen to the Senja island. Harbors, wharfs, fish production facilities, dwellings and public buildings were tools for the fishing industry – the imprint of the fisheries on land.

The resources, the fishing waters and the products describe a history of stability. The settlements, however had to reinvent themselves to adapt to new technologies, the logics of global production and markets, and national regulation policies. The monography follows Myre, today Norway’s most important harbor for cod fisheries. Myre mirrors the profound changes along the coast and is a showcase for building traditions, built ideologies and contemporary spatial practice and pragmatic architectural expressions.

North Atlantic Coast might be seen as belonging to a field of “rural studies”, where the situation and the future of rural areas in an urbanizing world is investigated. The book contains more than 200 illustrations, mostly the authors’ own photos from 40 years of studying these settlements. The illustrations create a separate story in the text. 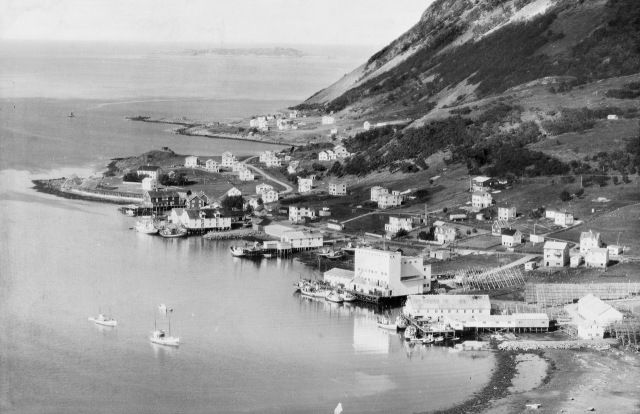 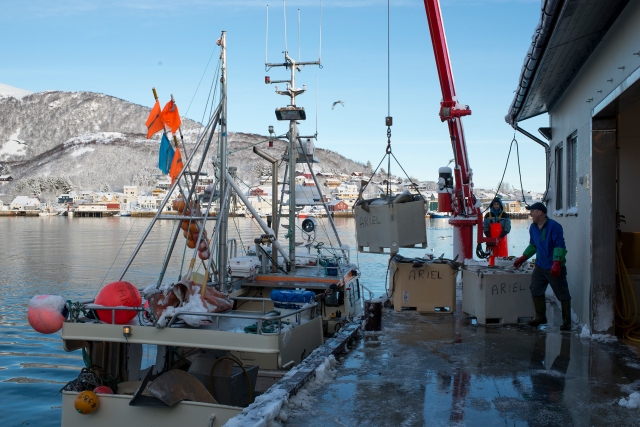 The book was launched at The Oslo School of Architecture and Design on the 5th. of September. In my introduction, I underlined that the discussion of the settlements along the North Atlantic Coast is a part of larger rural narrative that is local, national and global alike:

To study and write books about rural areas far out there up North, when the future mostly is depicted as urban, might be seen as a little weird. To study the messy environments mostly made by non-architects might also be seen as strange in a school where most of our works are discussed as works of art . However, these studies link to global phenomena and global challenges,

Dried cod became a sought-after commodity already during the age of the Vikings, around one thousand years ago. Dried cod was so to speak the first Norwegian Commodity that was sold in large quantities on international markets. And this market enabled specialization and lay the foundation for the first embryonic urbanization in Norway.

A fisherman in Northern Norway was just as connected to the European market and as sensitive to marked fluctuation as a weaver in Flanders. The resources, environments, and products describe a history of relative stability. Throughout the centuries, however, Norwegian coastal fishing settlements had to adapt to new technologies, the logics of global production and markets, and national regulation policies. The places and communities alike reinvented themselves many times through history, to cope with new situations, contexts, and conditions.

An example of global impact is how in the 1990s the deindustrialization of Europe also affected the fishing industries. Production – measured globally – proved to be too expensive in Norway. Norwegian fish was frozen in the north, then shipped to China, brought up its rivers, defrosted for filleting in inland cities with cheap labor, frozen again, and finally brought back to international markets, and even to the shops in the fishing villages.

North Atlantic Coast should be seen as belonging to a field of “rural studies”, where the situation and the future of rural areas in an urbanizing world is investigated. The city and the countryside, the urban and the rural, are becoming blurry and none operational categories. The countryside is being economically and culturally urbanized, and city regions encompass vast rural areas. The countryside is not stable but is changing along with the city. Most of the interest in urbanism in recent decades has dealt with the growth and transformation of cities, taking for granted that cities are where everyone will inevitably end up, and where a possible sustainable seems to be located. Little research and few studies have looked at the transformation of the countryside. The majority of professionals in architecture and urbanism have overlooked the profound transformations occurring in the rural areas of the world and the challenges being created therein. In an urbanized world the challenge of sustainability is inseparable from the organization of rural production, rural life and settlements.

At AHO we have tried to link into these challenges for some years. The development of a landscape education in Northern Norway together with the Arctic University is part of it. The Countryside Construction research program, investigating the transformation of Chinese villages, together with the Central Academy of Fine Arts in Beijing, is another part of it.

In economic terms, the primary characteristic of the rural areas is that natural resources are found there and can be exploited independent of urban concern. The countryside encompasses nearly all food production. Changes in ownership, rights, and degrees of industrialization in farming, fishing, and forestry will shape the living conditions and ways of life for people and provide the framework for future settlement patterns. These are challenges whose political responses will have far-reaching consequences. In the African countryside, vast tracts of land are acquired for industrial food production. In China, the way of life for the residents of one and a half million villages is to be modernized through new property structures and more effective modes of farming. Along the Norwegian coast, the ownership of fishery resources  and the modes of fish production are being reorganized. Restructuring processes and results of the political battle for rights will impact people’s opportunities, lives, and communities. As such, our discussion on the North Atlantic Coast  becomes part of a larger narrative that is local, national, and global alike.

Professor in Urbanisme and Architecture at the Oslo School of Architecture and Design, (1997–) Rektor at AHO 2001-2015. Visiting professor at Visual Arts Innovation Centre, Central Academy of Fine Arts (CAFA), Beijing (2017–). Honorary professor, CAFA, (2019–) President in European Association for Architectural Education (EAAE), (2013–2017)
View all posts by Karl Otto Ellefsen →
This entry was posted in Ukategorisert. Bookmark the permalink.
Loading Comments...
%d bloggers like this: